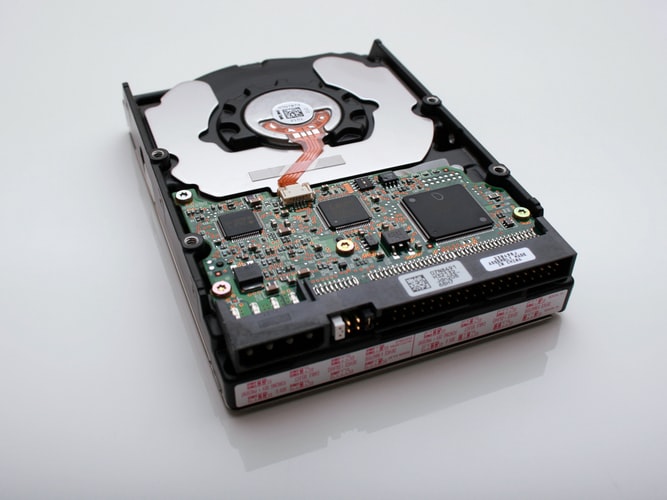 If you’re in the market for a new computer, one of the questions you will want to ask is “What kind of storage drive do I want?”. Until recently, most computers were made with hard disk drives (HDD). The main reason for this? There wasn’t anything better to safely store your information. That is, until solid state drives (SSD) came along.

The traditional HDD is a storage device in your computer that uses physical movement and magnetism to write code and digital information. It consists of one or more rotating magnetic disks that spin while an actuator arm with magnetic heads reads and writes data to the disk surfaces. This is called ‘non-volatile’ storage because it retains data even when the computer is off. HDDs have been around for over 50 years, and have steadily increased in storage capacity while decreasing in size.

Unlike HDDs, SSDs do not have any physical moving parts. Instead, SSDs rely on memory chips, usually NAND-style chips. These chips use circuit assemblies and semiconductors to convert different states of electrical charge to store digital data. These drives are called ‘solid state’ because nothing is physically moving within them.

Use less energy than HDDs, which helps keep your computer running at a cooler temperature.

More durable and has a resistance to damage and failure from being dropped.

More expensive than HDDs. Though, SSDs are rapidly progressing to be more cost-efficient with greater storage capacities.

NUCs (Next Unit of Computing)

Modern computers are following the trends of cellphones. People want smaller computers that are more powerful and more affordable. A computer made with solid state drives vs hard disk drives can be just that.  EWC Technologies has partnered with Intel to bring individuals and businesses the next generation of computers. NUCs are compact computers that pack a punch with large SSD storage, RAM, and different OS options to meet your needs.

EWC Technologies wanted to make a smaller, more powerful computer that is durable for a multitude of applications, so the choice to use solid state drives vs hard disk drives in their  NUC computers was easy. With the faster reading and writing speeds of the SSD, NUCs are perfect for entertainment, gaming, and multitasking in apps. The durability and size of the SSD make it excellent use in healthcare, fleet vehicles, and workstations. And, while the price of computers made with SSDs is typically more expensive, EWC Technologies manufactures their NUCs at prices that are just as affordable as leading competitor products, while still retaining the full power of a desktop in a more convenient size.

When shopping for your new computer, don’t get left behind with old tech. SSDs and HDDs are currently competing with each other, but soon the old will be replaced with the new, much like DVDs and CDs replaced VHS and cassette tapes. The next generation of computer technology is here, and we can expect it to continue to grow in popularity. Check out  EWC Technologies NUCs today and discover the difference between SSDs and HDDs for yourself.